Hubby and I went to the orchid show at the Chicago Botanic Garden.  More than 10,000 orchids filled the exhibition hall and three huge greenhouses, the first ever orchid exhibition that CBG has done.

I have to say, I never used to like orchids.  In fact, I had a distinct dislike for them.  I always thought the way the blooms arose out of the foliage on their long, bare stems looked very odd.  The flowers were colorful, but stuck on the ends of those stems like some kind of a brightly spotted cleaning tool.

What really bothered me, though, was the way the flowers had an indecent quality to them.  I’ve given botany lectures before… I know all about the birds, the bees, and that every plant wants to have sex and make other little “planties”.  But somehow, orchids flaunted that process in a way that I found distasteful.  Orchids aren’t just having sex.  They look like they’re having sex.  It took a long time for me to get past that and appreciate them (or accept them) as they are.

It was those botany lectures that turned me around.  I don’t know if I taught my audience anything, but I did end up teaching myself.  In the case of orchids, I came to be so fascinated with how overtly ingenious they are at finding ways to propagate, that I was able to overlook my own puritanical sensibilities.  Once I was able to put that aside, the barrier was breached and orchids began to wind their spindly little stems around my heart.

Plant reproduction can be done in more than one way and it can be a complicated process.  But in general, here’s a brief (very incomplete) description that fits a majority of plants:

The anther contains a yellow or reddish substance, which is pollen.  Pollen is the sperm-cell of the plant.  The stigma has a sweet, sticky end that lures insects (birds, etc.), who slide their tongues (or whatever!) inside to sip nectar. 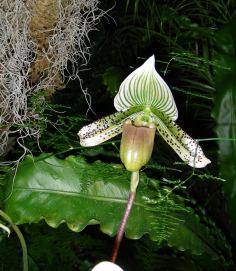 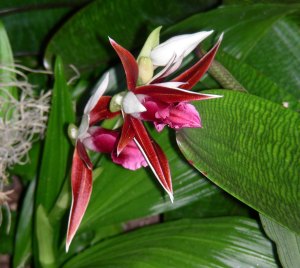 Pollination process:  the insect brushes up against the anthers while sipping nectar.  Pollen from the anthers clings to the insects body and they carry (transfer) it to the next stigma they visit.  The pollen (sperm) travels down the style (tube) to the ovary, where hundreds of egg-cells (ovules) await fertilization.  If an egg-cell is successfully fertilized, the ovule will develop into a mature seed.  Seeds are the end product of the sexual cycle.  The embryo will be inside of the seed.  If you could split the seed open that is.  In the case of orchids, the seeds are so tiny they are like dust.

The really interesting part is how the plant goes about attracting those pollinators in the first place.  Especially since some orchids don’t produce nectar.

These plants will actually produce a sweet, nectar-like scent or make their flowers look like they produce nectar, to draw in unsuspecting insects that haven’t got a clue.  Imagine the disappointment that bug is in for!  Too late, the insect’s already covered in orchid sperm and on his way to the next trick.

The flower might emit a specific smell, peculiar to a particular insect, something that only that particular bug has a yearning for.  Like scents that imitate the sexual hormone of the insect, or the smell may be reminiscent of rotting meat (to attract flies).  The release of the scent may be only during specific times, such as at night, for night-flying insects.

Or the flower may resemble a particular insect – taking on the color pattern, shape, scent, and texture of the female version, drawing the attention of the male insect (who once again is covered in sperm before he realizes he’s been duped). 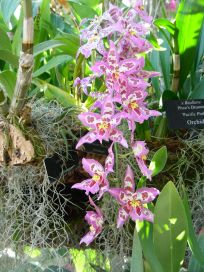 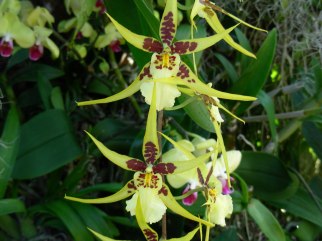 Flies love the colors red and brown (resembles “dead” things).  Bees like blue or yellow.  Butterflies prefer the “hot” oranges and reds, and moths go for white and pale pastels.

But orchids don’t just use color to attract pollinators, they also use them to repel them.  They might use red to draw the insect, then – when fertilization has taken place – the flower changes colors and becomes, say, yellow… because certain insects can’t see yellow, and so they’ll stop bothering the flower.

They create contrasting color patterns like a bulls-eye in the center (come and get it, right here!), or the bloom period coincides exactly with the period of greatest insect activity. 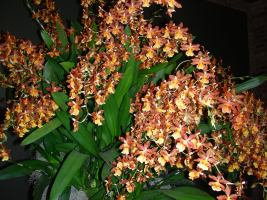 The multitude of messages and tricks that plants use to attract pollinators is complex and not fully understood.  None is more interesting to observe than those in the orchid.

Most orchids grow on trees and are native to the tropics and subtropics., but there are also those that grow on rocks and in the ground.  There are more than 200 species native to North America, approx. 45 of those in Illinois.  There are species on every continent (except Antarctica), in all kinds of habitats – deserts, mountains, semi-aquatic – there is even one species in Australia that grows and blooms completely underground!

Did you know that vanilla is actually an orchid?  The vanilla bean used to flavor your morning coffee is the dried and cured seedpod of Vanilla planifolia, an orchid native to Mexico.  The vanilla vine is also one of the most attractive vines on the planet (this is totally this author’s humble opinion). 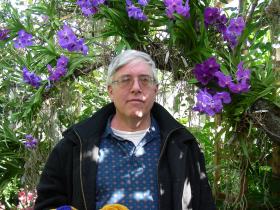 Unfortunately, for those of you that are interested in attending, the CBG exhibition ended March 16th.  Luckily, however, that really only means they’ve removed the orchids from the exhibition hall.  I’m sure there are still plenty of blooming orchids to see in the greenhouses, as they grow there year round.  If you haven’t gone there yet, do it soon.  They are incredible.

In the meantime, take a look at these pictures I’m sharing with you.  Imagine if you will the complexities that God and nature has created in these fascinating plants, and see if they don’t wind themselves around your heart as well. 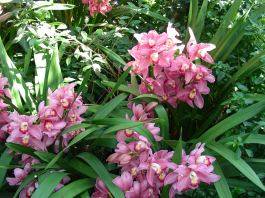 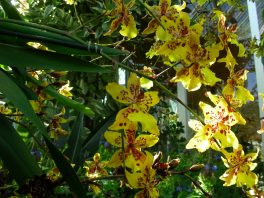 My Scottish garden and further afield.

PEN IN HER HAND

We've got the "Write Stuff"

Science Fiction and Other Suspect Ruminations
Garden of the Mind

A Writer For All Emotions